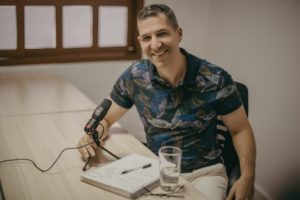 David Greenberg is a video performance artist and video editor and producer.

He is also a philosopher, abolitionist, anarchist & de-occultist.

David is the founder and creative director of FreedomVibe.art, a private media platform that teaches natural law and occult knowledge.

He is also an invited content creator on Mark Passio’s One Great Work Network.

David was born David Owen Greenberg on May 4, 1970 in Pittsburgh, Pennsylvania in the United States, to parents Brian David Greenberg and Jacqueline Ruth Wyner Greenberg.

Early in life, David expressed a strong intellect, andd an aptitude for both creativity and technical ability.

He went on to work as a systems and software engineer as well as an entrepreneur, sales and marketing professional.

In particular, he co-founded several businesses focused on providing services such as Salesforce.com implementation, web design, and social media marketing.

Unfortunately, David was also a “de facto Satanist” from an early age, due to the negative influences around him, and a lack of strong moral parenting and guidance.

Although he never formally joined any Satanic cult or secret society, he was principally motivated by selfish pleasure seeking and ego gratification, even at the expense of others.

He also believed in the religions of “moral relativism,” “solipsism,” and “statism.”

David considers these to have made him the “perfect slave” to the world’s social institutions.

But this also cost him many friendships and relationships.

Through the consequences of his poor choices of behavior over time, David began to suffer more and more.

At one point, he was addicted to pharmaceuticals for 12 years, along with sex and pornography, cigarettes and sugar.

One saving grace was David’s strong willpower, which allowed him to cure his own addictions, without the use of medications or external interventions.

Nonetheless, the external facade of his apparently successful life began to unravel faster and faster.

At one point, he was swindled out of thousands of dollars by a charlatan posing as a spirtual healer, marking how low David had fallen.

Finally, he reached his own personal “moment of choice.”

David explains that at this moment, he was serendipitously exposed to the science of natural law and objective morality.

Because he still had an inner voice of conscience, and a desire to evolve, he began dedicated himself to learning and understanding the occulted sciences.

He began an intense period of shadow work and healing of long-held traumas and mind-control programming, many since his childhood.

Today, he is one hundred percent committed to doing “the great work” of helping to end worldwide human slavery and suffering.

As David puts it:

“There are no non-player characters in life.

“If someone with a consciousness as low and degraded as mine  can evolve and extricate themselves from their own self-created hell, then anyone can do it.”